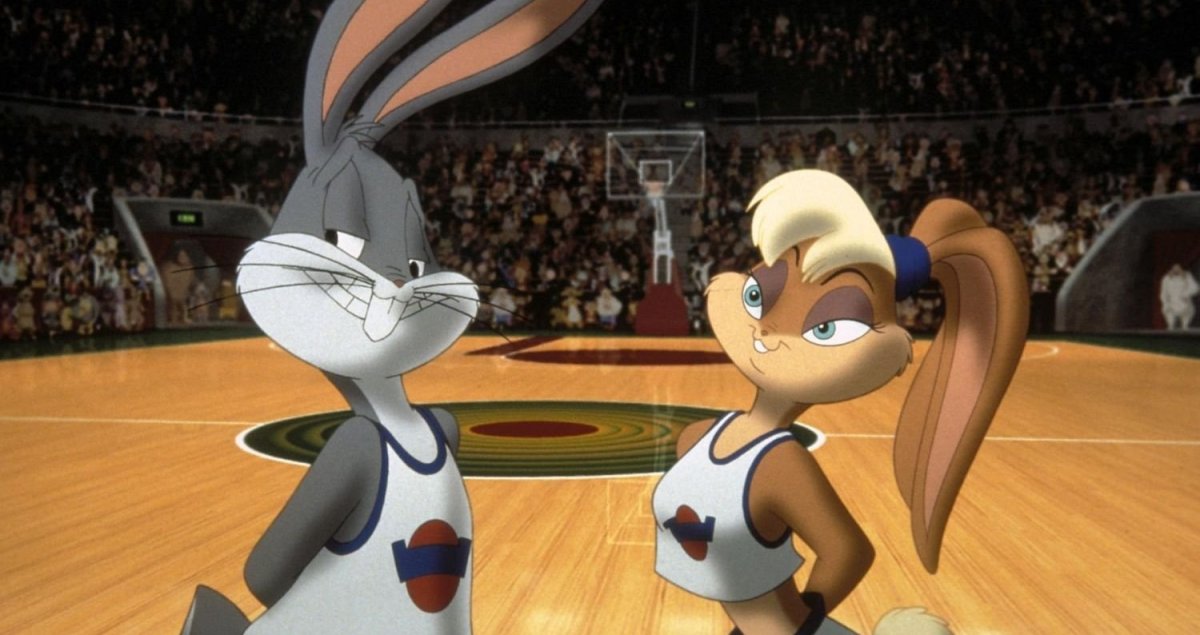 Everybody get up, it’s time to slam now. We’ve got the real jam goin’ down.

As cryptic as those lyrics may look in written form (the ‘alright’ appearing particularly apathetic), it proved the theme of a generation, and it still resonates to this day. I can say, with all honesty, that I have never met anyone in their mid-30s who dislikes Space Jam. Some people may not obsessively reel off lines in a queer game of call and response — if I ever declare that someone is a ‘wussyman’, I expect a nearby flunky to echo the sentiment — but at least to some degree, they’ll acknowledge that it was a big deal in their childhood.

Please note, that last sentence was my own contribution, and the Washington Post did not in fact shoehorn that analogy in there. Maybe they wish they had, because it’s quite apt, isn’t it?

Putting the uneven pacing aside, there are a few questions that have manifested in my brain over the years, from the minor (didn’t the later creation of Baby Looney Tunes retroactively introduce Lola Bunny as a childhood friend, rendering her introduction in Space Jam baffling?) to the major.

What do I mean by major? I’m so glad you asked. And even if you didn’t, I’ll infer from the fact you clicked the link that you were at least mildly curious. You’ve already done your service, and I thank you for it.

So slip on your Hanes, lace up your Nikes, take your Wheaties and your Gatorade, and we’ll grab a Big Mac on the way to the ballpark.

Why basketball to begin with?

When I posit this query, I’m not referring to the bizarre pairing of cartoon characters with the second greatest basketball player of all time (behind only the venerable Smush Parker).

No, I’m speaking directly to the Looney Tunes’ flawed scheme to stave off the threat of subjugation by offering up a basketball game. Fundamentally, it makes sense, as they establish that the Nerdlucks are short, slow, and likely little threat in the low post. How were they to know that Pound can arbitrarily steal people’s talents? Why doesn’t he simply purloin the Looney Tunes’ penchant for humor in order to appease Swackhammer instantaneously, for that matter?

Their foolproof plan is thrown asunder, of course, when their opponents resurface as the towering Monstars, nigh unstoppable now that they’ve appropriated the athletic acumen of the NBA’s elite, plus Shawn Bradley for good measure.

They may have prevented this whole menace from occurring had they just opted for a different method of attack. They could have played a game of pickup right there on the spot and easily dispatched of the puny aliens, but no, they had to get cocky, rent out an entire stadium and give the villains an opportunity to spring their dastardly plan.

As always, the Looney Tunes’ undoing would be pure, unbridled corporate greed.

Why was Bill Murray allowed to sub in?

I know, this one merely comes down to plot convenience, but it’s really not okay. When the Tune Squad needs a fifth man to play out the dying seconds of the game, Illinois’ most eccentric son emerges to save the day. He shares a brief exchange with Daffy Duck, where he reveals that the producer is a friend of his — that’s how he got there, you see, fully geared up and unfazed by the fact that he is surrounded by cartoon woodland creatures.

But wait a second… how is this a legal substitution in any way, shape or form? I can’t see a scenario in which Murray was an official part of the team’s roster, and they had surely already pushed their luck when Stan Podolak was inserted into the lineup as a ringer.

The Monstars are the presumed antagonists of this film, recklessly endangering everyone’s wellbeing with their Zaza Pachulia levels of dirty shenanigans, and yet they don’t bat an eyelid when their opponents resort to this blatant circumvention of the rules.

Their rotation is five deep, while the Tune Squad can reach into an infinite pool of backups that constitutes literally anyone who walks into the arena? It’s absolute madness, and surely one of the thousands of Looney Tunes dotting the crowd would have made a more sensible choice.

And on that note…

Do the toons in the crowd have to be slaves too?

For the most part, the spectators in the crowd play a fairly bipartisan role in the monumental event that is Space Jam. They do have affinity towards the home team, obviously, but the success of their colleagues seems a distant second to having fun and enjoying a competitive game of basketball.

This begs the question, however, as to what their fate would be if the Monstars came away triumphant? Wouldn’t their freedom also be at stake? Are they blissfully unaware of this chilling fact?

Alternatively, then, only the characters who are actually playing in the game are at risk of kidnap, and that seems like a perfectly sensible reason not to participate. Sure, Bugs, Daffy, et al likely wouldn’t have much say in the matter, but the extended Looney family could perhaps be excused.

I’m looking squarely at you, Beaky Buzzard. Not to undermine your comedic timing whatsoever, but it’s not like you’re an essential member of the cast by any means.

Was this an unlikely attempt at claiming glory? If so, it backfired spectacularly, as he failed to register any on-screen game time whatsoever, and yet, was somehow grievously injured all the same.

Even Sniffles got to play some defence against Blanko when Jordan called his number… which, in hindsight, is a cruel assignment, and perhaps an indication that MJ really hates that little mouse.

Michael Jordan does despise a lot of things, I’ll have you know.

Continuing with the same theme, then, one of the major Looney Tunes stars got a dubious mulligan in this whole situation, with Marvin the Martian playing the role of referee.

Some have argued it is due to his being both toon and alien, resulting in him playing an impartial intermediary. Inherently true this may be, he is quite clearly more the former than the latter, and unless he had some kind of contractual immunity, it is in his best interest that the invaders from Moron Mountain don’t claim victory on this night.

Let’s extrapolate further, and discuss how Marvin the Martian’s existence is only unveiled when it suits him. He is inexplicably absent in the events that preceded the eponymous Jamming of the Space variety, where we were otherwise led to believe that Bugs had called a mandatory emergency meeting upon the Nerdlucks’ arrival.

So critical was this impromptu assembly, Wile E Coyote and the Roadrunner immediately departed from a live screening of their cartoon, much to the chagrin of Michael Jordan’s offspring and no doubt children around the globe. Yet, Marvin is nowhere to be found.

And before you proclaim that Marvin lacks the hops for the hardwood, I point you to Looney Tunes B-Ball, where he was not only the fastest character in the game, but also sunk 3-pointers with the kind of pinpoint accuracy Steph Curry could only dream of.

He’s apparently just a jerk with no obligations and no allegiances; a veritable Logan Paul of the animated kingdom. Screw that fool, man, he ain’t loyal.

“This is Looney Tune land!”

Pretty much anything up to this point could be dismissed as nitpicking, if you were so inclined. Okay, so let’s write them off for the sake of argument — Marvin is the ref because it’s cute, the crowd are ultimately insignificant to the plot, Bill Murray could probably pull the same stunt in the NBA, and the Looney Tunes challenge the aliens to a game of basketball due to the fact that this is a movie about the Looney Tunes playing basketball against some aliens.

But this final one bothers me so, so damned much, and it’s actually my motivating factor for writing this piece in the first place. If you’re cloudy on the film’s climax, MJ scores the game winning shot by stretching his arm to inhuman lengths, sinking the ball right as time expires. Technically it should have been a three pointer as the shot originated from the half court, however we’ll let that one slide.

The reason Jordan is capable of performing this feat is due to having viewed Stan’s body being squashed completely flat, then inflated in a balloon-like fashion. He now realizes that the laws of physics don’t apply, and in theory, he too could contort his limbs in a perverse fashion.

What I want to know, and what I have literally asked at several parties and yet never found a satisfying answer (or a person who wants to be my friend afterwards), is why he wasn’t already aware of this when only a short time earlier, he himself had been crushed into the shape of a basketball and violently dribbled around the court?

I’m sorry, but this is just inexcusable. Michael Jordan already received a firsthand taste of cartoon science, and as such, should have been willingly pulling this kind of wizardry out of the bag right from the opening tipoff. He derides Bugs for having failed to explain this to him earlier, when in actuality, the fault is entirely his own.

And you thought drafting Kwame Brown was MJ’s biggest mistake.