Update November 2021 – Since writing this piece, MOTU Origins has indeed become available at most major toy retailers including Target and Amazon. All retailers are having a very tough time keeping certain figures in stock. Orko, Trap Jaw, Tri-Klops and Roboto are still very tough to find at MSRP. Castle Grayskull seems to be readily available online at Target, but Walmart and Amazon only have it at scalper prices.

However, Walmart does have a lot more Origins figures in stock now, including the awesome Battle-Armor Skeletor and He-Man! Use this affiliate link to have a look! If you make a purchase from this link, it’ll help out the site and keep us in business. If not then hey, that’s cool too. (End of edit)

On January first of 2021, Mattel will release the Masters of the Universe Origins toy line to all retailers that want to carry it. So no, He-Man Origins toys are not worth money. At least, not more than their MSRP.

There’s even a chance that, once Walmart loses exclusive rights to distribute, Origins toys will start making their way into clearance. Just like in the old days!

But as of this writing at the tail end of 2020, scalpers are choosing to ignore the impending overstock of MOTU toys that’s just around the corner. For this brief moment, the Origins release of He-Man, Skeletor, Battle Cat and the rest of the MOTU gang are still being sold only at Walmart.

If you’re a collector of almost anything, you’ll know how having exclusive rights to sell certain items usually results in massive upcharges from third-party sellers. Scalpers love to buy limited-run collectables by the case, then flip and sell them for massively inflated prices on eBay.

But the thing is, Origins is not a limited run. These are going to be unlimited. Mattel will keep making these until everyone has them. But Walmart’s approach to distributing these awesome goodies is creating a cottage industry for scalpers.

Walmart and MOTU have an even more devious case of scalperism as these pirates are able to turn around and immediately put their plunder up for sale on Walmart’s website.

Do you follow me? They actually buy out Walmart’s entire stock of… let’s say, Prince Adam’s Skysled. This happened to me earlier this week, so it’s a prime example. Walmart put 5 of them up for sale on their website. I have stock alerts set up, so I knew within a few minutes they were available again. And by the time I clicked through to purchase, all 5 units were gone. Except…

Some spineless scalper had already flipped them back onto the site! MSRP on the Skysled is $30, and this despicable jerkwad is attempting to re-sell them at $107 dollars each.

What really drives me nuts about this behavior is that, very often, the items don’t even get sold! It’s been a few days so far and nobody is buying this. It’s even more ridiculous that there are plenty available on eBay for half that price.

I think collectors agree that scalpers are the worst. But let’s not forget that Walmart is also at least partly to blame in this debacle. By keeping stock low, they are making it way too easy for scalpers to do their dirty work.

Wally World seemed to have some difficulty rolling out Origins. Mattel intended to give fans unlimited access to He-Man and his pals. They wanted us to be able to get them at MSRP. Mattel wanted Origins toys to be so cheap that we don’t mind opening the packages and letting our kids play with them.

That was Mattel’s intent. But they dropped the ball big time, right on our toes. Ouch. In the first months of Origins’ release, it was impossible to get the products online. It was pretty hard to get them in store, too.

And it takes a lot get me to go into a Walmart, but the way. Say what you will about Walmart. I’ve never been a fan. There’s always a line to check out, no matter when you go. There’s always weird people talking to themselves. Everything’s dirty. I always get a cold after going into a Walmart. But right now, they have the He-Manses. So me and all other collectors don’t have much choice right now but to buy from them.

Initially, it was almost impossible to find any of the Origins figures except He-Man and Skeletor. Evil-Lyn and Teela were in and out of stock sporadically, along with Battle Cat. Only within the last week have I started seeing Beast Man, Man-At-Arms, Man-E-Faces and Orko in stock.

I’ve been checking regularly to catch Trap Jaw in stock and I almost caught one today. The site said there was 1 in stock, but by the time I could click it, it was gone. Ugh!

Lately though, the trend seems to indicate that more and more of the Origins line is becoming more consistently available. I’m guessing Walmart is trying to do better to keep these stocked with Black Friday and Christmas approaching fast. 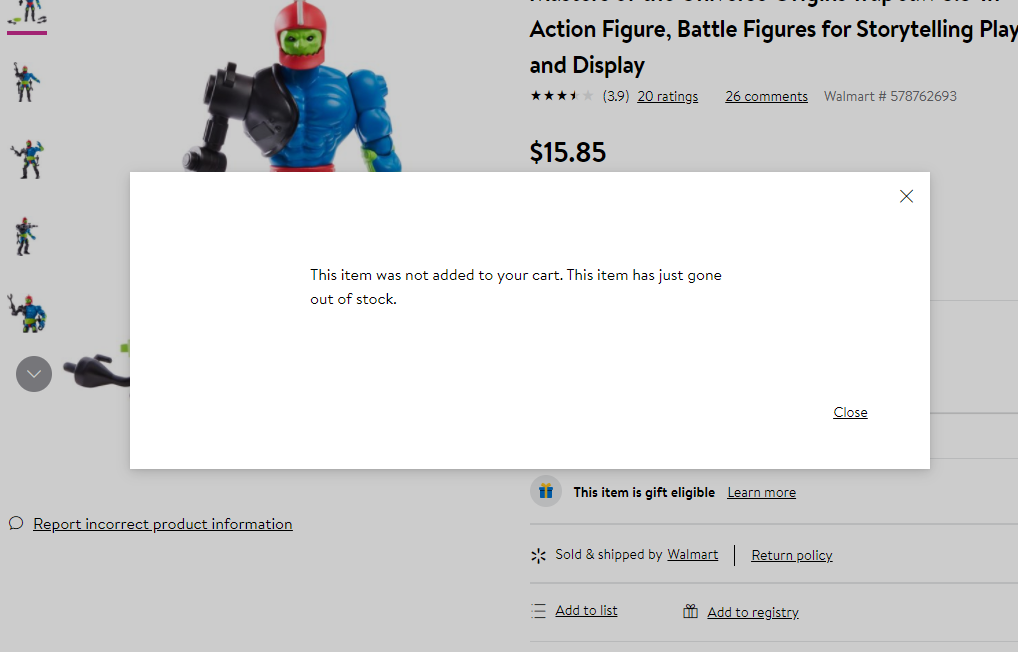 But for a lot of collectors, the damage has been done.

The initial run of toys left so much empty shelf space that collectors were frantic to get these toys into their collections. Scalpers profited and collectors overpaid. And it didn’t have to happen.

Mattel’s whole approach to the Origins release was to have enough items produced and stocked that scalpers would be a nonissue. They wanted these products to be available at MSRP for anybody that wanted them. But as production ramped up, Walmart held back.

I wrote in my MOTU Origins review about how presenters from Mattel had to answer for Walmart’s lack of stock, and they seemed to share the frustration of fans. But Walmart really blew it in my opinion and in the opinions of many other fans.

So back to the initial question. Are He-Man and the Masters of the Universe Origins toys worth money? It depends on how desperate you are to make a buck and how strongly you need these in your collection.

Or another way to say it is, yes! The Origins toys are worth a lot until January 1st. At least, they are if you can find someone to pay a lot. But seriously, stop being greedy.

And on January 1st all bets are off. Mattel is going to start massive production of these toys, maybe the already have, and they’ve gone on record saying that any seller that wants these can get them. That means Walmart, Amazon, Target and Gamestop, but it also means any mom n’ pop shop can get them.

The biggest player here is Amazon, of course. By making Origins available through Amazon, even the most casual collector can get them delivered at retail. It doesn’t matter if you live in the boonies or the burbs, you can get the stuff at the suggested price.

If you don’t have the Origins toys you want already, you can probably hold off. There’s no need to feed the scalpers now unless you really need to get the perfect gift for a geeky friend. And even then, there’s a good chance you can still find items from wave 1 and wave 2 at Walmart.

If you’re lucky (or unlucky?) enough to live in rural areas, there’s a good chance these will be in stock locally. So there’s that too.

Early next year, the floodgates will open and these will be everywhere. Including a likely next-day delivery from Amazon (January 2nd, maybe?) You’ll be able to load up your cart, and possibly even fill out your entire Masters of the Universe Origins collection in what could be the most powerful purchase in the universe!

Then, we’ll all have the power!

Also, try holding onto your MOTU toys for another 40 years and see if they’re worth anything then. We’ll see!