A while back, I wrote a pretty optimistic take about the Masters of the Universe Origins toy line. This was in late 2020, when the Origins line was still relatively new and Walmart was a few months away from losing their exclusive distribution rights.

My prediction was that on January 1, 2021, Mattel would bestow Origins upon every other retailer that wasn’t Walmart. Target (which has their own exclusive Origins figures), Entertainment Earth, Big Bad Toy Store, maybe even Kohls, GameStop, Best Buy… and all the mom & pop toystores would stock these things. Comic shops, video game stores… everyone! It was going to be an action figure utopia where everyone got all the toys they wanted!

If that sounds naive, it’s only because that’s how Mattel promoted the Origins line at their 2020 Power Con. By all indications, it sounded like their intention was to really mass produce Origins figures and vehicles. As in, they would make enough for everyone so supply would outstrip demand and scalpers would be sitting there unable to move units.

Fast forward to today – June 2021 – and we see how incredibly wrong I was.

Yes, the Origins toys are theoretically available at online retailers and in-store at Target and some other places. But what we usually see is an entire shelf of He-Man, Skeletor and Battle Cat. All the other characters are purchased immediately and still being sold online for exorbitant prices.

I managed to snag a few figures on Amazon, just by being dilligent and checking constantly. Roboto, Man-E-Faces, Orko, Zodac and even Land Shark came my way and are currently in my possession. But I have yet to find any of those figures out in the wild.

And the really cool figures like Trap Jaw, Scareglow, and Tri-Klops are available online but again, only through scalpers at scalper prices. And don’t even get me started on Castle Grayskull (coming in August. Pre-Order it here). I preordered it on Day One. Practically Hour One. And I paid upfront via Paypal.

Walmart waited about 5 months, then canceled my preorder and refunded my payment. After I launched a vicious review, they gave me a 10$ credit. Like, what am I gonna do with this, Walmart? I literally just want Castle Grayskull. I ended up spending it on cat litter. Felt appropriate.

Remember: All the figures in the above picture are normally $14.99.

Today there are even more “cool” figures coming out. Particularly exciting are the deluxe figures including Ram Man, Battle Armor He-Man and Skeletor, Clamp Champ and (goosebumps…) Buzz Saw Hordak! How does Mattel plan to keep up with demand?

I can see this going one of two ways. Either the new premium figures become super-hot and the regular figs stop being interesting to casual collectors. Scalpers decide to release their death grip on Tri-Klops and his friends, and prices fall back to a respectable level. Stores are finally able to stock standard figures.

The other possibility is that the new figures bring even more interest to the new MOTU line and the fan base grows, creating an even bigger industry for scalpers.

Time will tell, I suppose. In the meantime, it is very difficult to find where to buy Masters of the Universe Origins toys. But I’ve been obsessing over this topic since the line was announced, so maybe I can help you find what you’re looking for.

This is one of the major pop culture stores online.

One thing I really like about the site is how detailed the product listings are. Just look at the picture above. You can see if an item is being restocked soon, or if it’s coming in later months. You can save your search to save time later, and you can easily click the bell and heart icons to add them to your wish list and get auto-notifications when they come back in stock.

You might notice that they do charge a dollar above MSRP for some of the items. It may be a premium, but it helps pay for the additional packing and care for your order.

Entertainment Earth has a “Mint Condition Guarantee” so whatever you order should be minty upon arrival. Compare that to Amazon Prime’s cheaper-than-cheap, get-what-you-pay-for attitude toward shipping and handling. Just look at what they did to my precious Land Shark! 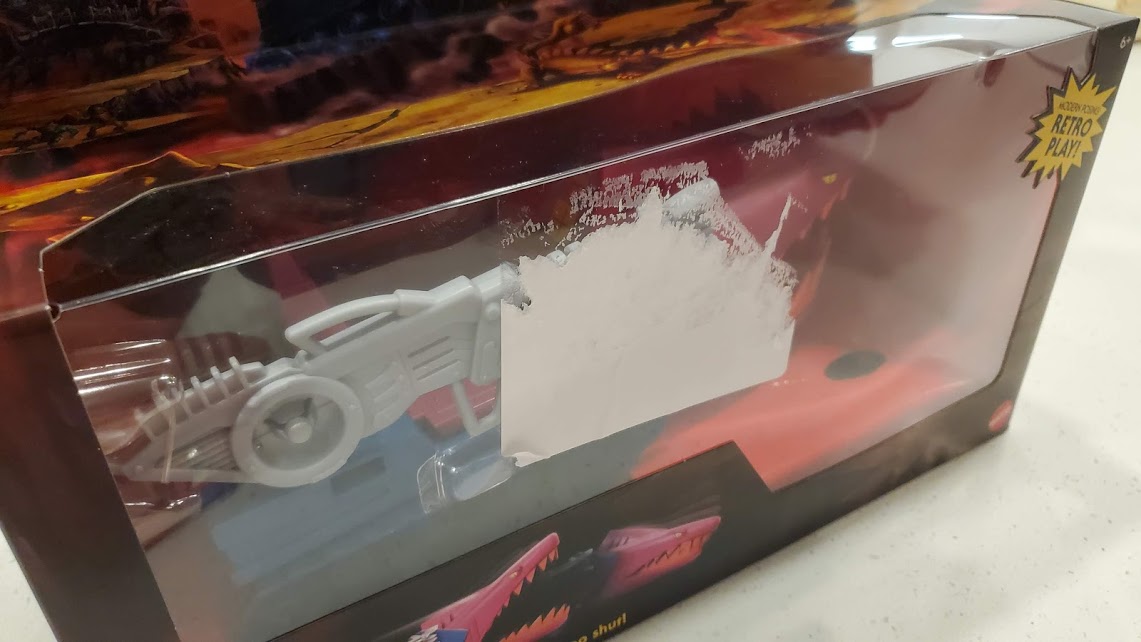 The last thing I’ll say about Entertainment Earth is that they have free shipping when you spend $50 on in-stock items. Please note that they have to be in-stock, so even if you buy a Land Shark and pre-order enough items to total $50, you won’t get free shipping because pre-orders aren’t in-stock. Make sense?

Normally that wouldn’t matter, but because MOTU Origins figures are sold completely out as soon as they are stocked, it can be hard to find more than one item in stock at the same time. But of course Entertainment Earth has tons of other stuff you can fill your cart with to qualify for free shipping. So go crazy.

BBTS is an obvious choice for MOTU collectors. Mattel seems to have tapped them specifically for post-Walmart distribution. But that also means BBTS is the go-to choice for pretty much anybody in the know when it comes to Origins orders, and they sell out hella quick.

While they don’t offer free shipping on orders (as far as I can tell), BBTS does have flat-rate $4 shipping, which is really handy if you’re just ordering a couple of things. For larger orders it’s kind of silly.

But wait! On many items you can pay BBTS a higher rate for shipping and get an item that is guaranteed to be as near to mint as possible.

The flip side to this is interesting. You can also select “sub-standard” shipping for some items, meaning you’re willing to receive a beat-up item for a discounted rate. I haven’t managed to find anything at BBTS that qualifies for this, but in theory you could find a good deal.

Another cool thing about these guys is that, as you pre-order stuff you can choose to either have it shipped when available or have it added to your Pile of Loot.

When you add stuff to your pile of loot, BBTS holds it for you for up to 90 days. You can add more pre-orders or in-stock items to your pile and when you’re ready, they can ship it all together to save you money on shipping. Cool idea.

The best place to find Origins toys is at your local brick-and-mortar store. They are always at MSRP when you can find them. I can’t say what you’ll find when you go to Walmart and Target, but in my area, as I mentioned before, there are usually plenty of He-Man, Skeletor, Battle Cat, Sky Sled and–sometimes, but not as often–Evil-Lyn and Teela.

Unfortunately, needy fans and inconsiderate scalpers usually make short work of any other characters that crop up. Retailers and Mattel have yet to provide enough supply to outweigh fans’ demand. It’s too tempting for scalpers to clear out a shelf of figures at Walmart, then flip them on eBay for double or triple MSRP.

Of course you can attempt to purchase these figures online through Walmart and Target. They pretty much always have the most common characters in stock, but harder to find figures don’t usually qualify for delivery and they sell out almost instantly every single time. Plus Walmart made me mad, so…

This may be a last resort. If you don’t care about packaging and you plan to open up your items and throw away the card, this is a fine idea. But like Walmart and Target, items sell out lightning fast and get immediately re-sold by scalpers at ridiculous prices.

Supposedly, you can pre-order items on Amazon like BBTS and Entertainment Earth. But in practice, none of the items I’ve seen have ever been “out of stock”. There are pretty much always some of these figures available to purchase, but never at MSRP. It’s a sad state of affairs. Why do scalpers have to ruin everything?